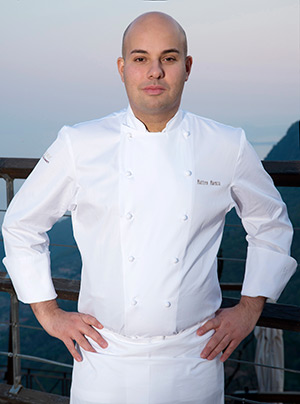 FOR THE RED MULLET: fillet the red mullet and leave attached by the tail, arrange on a sheet of cling film and place a basil leaf between the fillets. Wrap up the red mullet, securing well, and seal them in a vacuum (for at least 4 hours or freeze). Roll the red mullet in egg and white breadcrumbs blended twice, place in the fridge or on a baking tray covered with a tea towel or paper.

FOR THE ORANGE REDUCTION: reduce the orange juice by half and set aside. When needed, heat the

orange in a bowl and bain marie, leave to cool, add half a dessertspoon of water and emulsify with oil.

FOR THE CAULIFLOWER: clean the cauliflower, keeping the green part of the leaves, blanche and set

aside. Cut up the cauliflower into individual florets and sear in a pan with butter. Pour over

a small amount of water and add a dessertspoon of curry paste. Cook until “al dente” and then cool down.

FOR THE FENNEL PURÉ: cut the fennel very finely. In a large saucepan, create a base of oil and chopped

shallot, add the fennel, a pinch of coarse salt and sauté without letting it change colour. Pour over

boiling water and hot cream, add a small piece of lemongrass and cook over a high flame. Drain the

cooking liquid (set aside and reduce). Cool down the fennel and blend adding wild fennel if you have it and, if necessary, a small amount of cooking liquid. Blend carefully and once it has been passed

through a conical strainer, whip with a small amount of extra-virgin olive oil.

FOR THE TAPENADE: blend the tapenade, adding enough water to create a sauce, then emulsify with a

Warm up the cauliflower. Fry the red mullet. Arrange the warm fennel cream on a plate and then create a

ring of tapenade sauce around the cream. Add the cauliflower, green leaves and fried red mullet, and

decorate with with a few crumbled dehydrated olives.